Halloween, the spookiest holiday of the year, celebrated by dressing up and knocking on strangers' doors for candy. The origin of Halloween is often credited to Samhain, a Celtic festival celebrating the end of the harvest season and the Celtic new year. Bonfires, into which the bones of slaughtered livestock were thrown, ensured a successful harvest and a brought good tidings for the new year. Traditions from all over the world recognize this time of year as a gateway between the normal and the paranormal breaking down. It is the time of year when the boundary between the living and the dead, the natural and super-natural, and good and evil, are at their thinnest.  It was believed that the deceased and spirits would causes us problems, such as damaged crops and sickness and cause all kinds of mishap. Costumes, masks, house decorations such as jack-o'-lanterns and other various ornaments were used to ward off evil spirits thereby ensuring good health and a successful harvest.

Halloween, it's all about keeping those evil spirits, harbingers of the demonic, monsters, ghosts and ghouls, at bay.

As mentioned above, and I believe it's widely known, the purpose of dressing ourselves up as witches, warlocks, demons, zombies, monsters, mummies, vampires, werewolves, ghouls, goblins, etc. is to be scarier than the evil spirits! The intent is to make them so scared to be on our plane of existence that they cower back to Hell, or wherever they're from. Even its current diluted form, the point of Halloween is to have some fun with the macabre, the gothic and the grotesque. For Halloween, dress up scary!

So why the hell do I see lame costumes such as cowboys, princesses, comic super-heroes, ballerinas, pirates, knights, aliens, television/movie/cartoon characters, transvestites and a plethora of 'gag' costumes such as hotdogs, flashers, pimps, breast-inspecting stations, political figures and condoms? None of these are in the least bit scary -  with the possible exception of political figures. No evil specter is going to run from a caveman or a genie. Boba Fett or Yoda are not going to strike fear into an archvile of Satan. What do you hope to scare dressing up as a bunny?!? 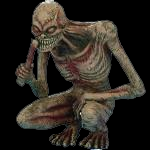 Ghouls (left) are spooky. Fairies are absolutely not scary and a poor choice for a Halloween costume

I'd like to start a grassroots movement to get Halloween back on track! Get people focused back on the grisly, bloodcurdling and frightening aspects of Halloween. Sadly, I'm far too lazy to take on such an endeavour, but perhaps others could pick up my torch. My basic tenants are:

An old, scary witch is a good Halloween costume

A sexy witch is not scary, but it's a fine costume for Halloween and year round

A cellphone costume: Anyone who wears this is an asshole

With a little bit of effort, none of it mine, this should really catch on. Halloween should be a fun event filled with superstitious imagery, scary icons and spooky vibes. Don't take up this cause and soon you'll be holding a Disney Mardi-Gras on your front porch on what should be the most frightening night of the year.