Independent studies show that shoplifting costs the American retail industry, and thereby the American public, $33.21 billion dollars per year, accounting for 1/3 of the total inventory shrinkage. Here is an inside, semi-indepth look at the devices which deter shoplifting and theft and their impact on honest consumers.

I would think just about everyone knows of the plastic security devices attached to clothes in department stores that prevent theft. They are the electronic contrivances responsible for setting off the loud beeping noise when you are leave the store. The noise attracts the attention of all the nearby shoppers but rarely the store's employees and never the store's security. The message to shoplifters is loud and clear, “Shoplift from this store and you will be mildly embarrassed.”

The devices are cleverly designed. They typically boast that improper removal will cause ink and glass to be released from the device onto the clothes thereby ruining the clothing. They are rigged to set off an alarm should they pass the plastic and electronic monoliths placed at the entrance/exit of the store. They are pinned to clothing in such a manner that only a special tool may unpin them. The device is removed by the store clerk upon paying for the item.

The chink in the armour for honest folk who pay for their possessions is that sometimes the store clerk forgets to remove the device. The oversight is noticed as soon as the consumer tries to exit the store; the alarm beeps and wails, people turn around to stare and a store clerk gives them the indication that they may leave without further inspection.  This has become the normal alarm reaction procedure. Stores may as well include this procedure in their employee handbooks. This indicates that this sort of thing happens all the time. Worse, it points towards the fact that the alarm is triggered falsely more often than not.

This leaves the consumer with a choice; rummage through their articles at the door in order to find the article or articles with the security device attached and bring it back to the appropriate department so the device may be properly removed or keep walking and worry about it later. To aid in the decision, most security devices are deliberately designed to not be seen, i.e. DVDs and CDs, leading consumers to assume that even if they look they won’t find the article triggering the alarm. With the assurance from a store clerk that all is fine, the choice is made even easier. Keep walking and worry about it later.

How this affected me

Recently, such events unfolded upon me and I took the easy choice, keep walking and worry about it later. ‘Later’ happened 10 minutes later when I got home. There was a nice, fat, plastic security device attached to a pair of jeans that I noticed when unpacking the purchases. A sticker on the device claimed that if I tried removing this device myself ink and glass would ruin my garment. Damn! Two questions immediately arose: How do I remove this security device and since when are jeans considered a garment? A strange mix of inadequacy and gayness washed over me. There was little I could do about the gayness, if jeans were considered garments then the only thing I could do was complement the jeans with a nice blouse or fanny-pack; however, I was in control of the inadequacy. Nothing makes you feel more empowered than a screwdriver, a box-cutter and a set of needle-nose pliers.

Now, I’ve not had special training in this. Such intricate gadgetry is often best left to experts like store clerks who have also mastered other such complicated doodads such as the cash-register and Visa card machines. I’m not sure how extensive the training course is for anti-theft-device-removal but I neither have the time, resources nor inclination to take such a course. I’m going to do what man has done since the dawn of time when confronted with a problem that requires patience, ingenuity and a delicate touch - I’m going to apply brute force.

Anti-shoplifting devices have many shapes and sizes yet all seem to work the same way – screw with them and they’ll ruin the product they’re intended to protect. The particular device attached to my garment was pill-shaped on the outside and looked like a landed UFO on the inside. 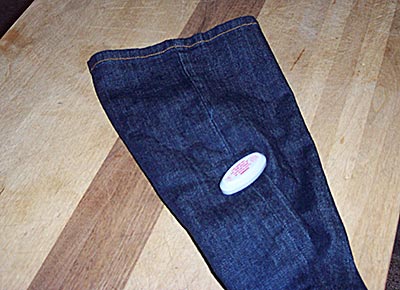 The anti-theft device attached to a pair of jeans

Figure 1: A cross-sectional view of the anti-theft device

Obviously, the answer was to pick a random spot and hope for the best. 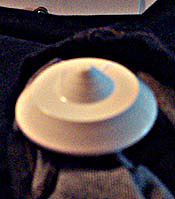 Figure 2: Close-up of the UFO-looking section

The UFO-looking section seemed the best place to start since it was the largest section and therefore easiest to work on (Figure 2). Utilizing all 3 tools in my arsenal, the needle-nose, box-cutters and screwdriver, I cut the ‘nipple’ off of the UFO-looking part of the device. I took a bit of areole with it and was able to get a good look inside the device. Not much going on here; the outer rim had some wiring and a transmitter which sets off the alarm and a little translucent plastic ball which holds the pin in place. I did not notice any glass or ink so I proceeded to open up the device like I was gutting a fish (Figure 3). 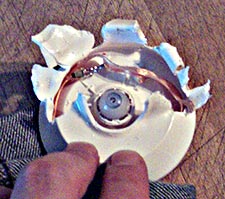 Sure enough, the UFO-looking part is a very simple device. The copper bands riding the circumference of the device trigger the alarm should they pass sensors located at store exits. The ball in the middle looked simple but since it is the piece of the contraption that holds the whole thing together I assumed the ball was deceptively simple. Its purpose is to hold the pin in place and hold it strong enough that criminals can't pull the pin out. I also assumed it must be rigged to the dreaded ink and glass. I must proceed with extreme caution.

I wish I could make this section longer since it’s really the crux of this whole article but I can't. What happened was I was looking at the thing, wondering how the hell I was going to remove it without damaging the clothing, and it just came apart in my hands. Rather anti-climatic.

Where’s the Ink and Glass? 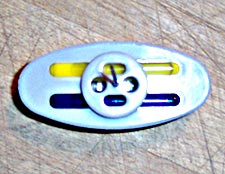 Figure 4: The ink and glass are stored in the front section of the device

The ink and glass are not stored in the UFO-looking device as I originally thought; they are part of the smaller, pill-shaped piece that is on the outside of the garment (Figure 4). I assumed the UFO-looking device would contain the ink and glass since it is the biggest piece and could easily store lots of ink and lots of glass, but knowing what we all know now I realize that I was a stupid ass. Why would they damage clothing on the inside of the clothing? Hardly a theft deterrent if the clothing is thick, like jeans. I was surprised to see that the glass isn't placed in the device just to cause damage, it is there only to hold the ink. If the glass does cause fabric damage or bodily injury it's just a nice bonus.

As we can see in Figure 4, there are actually two ink colours laying in wait to ruin your garment; blue and yellow. If you plan on shoplifting clothes I strongly suggest you stick to fabrics of these two colours, or at least coloured fabrics that would compliment or accent blue and yellow. Perhaps primary complements such as an orange and purple garment would look dazzling with a big yellow and blue blotch on it. A blotched tertiary scheme would look fantastic and be the hit of any social gathering.

Twice I sliced my fingers when trying to separate the nipple from the UFO. I took another nasty gouge when removing the remaining plastic from the UFO piece and I managed to give myself a good poke in the palm with the pin. The after-affects were long-lasting - I couldn't eat salted chips for well over two weeks. BBQ-flavoured chips were out of the question. Also, while typing this article I had to skip the letters e, d, c and u, j, m because of my sliced fingers. Typing while eating chips was not only excruciatingly painful but also left my keyboard greasy. All e, d, c, u, j and m's were added after the fact by an assistant.

It has been a lesson well learned.