Articles  All Hail The Fonz

All Hail The Fonz

Whether it’s the the cuffed jeans, the black leather jacket, the white t-shirt, the brill-creamed, duck-tailed pompadour, or the steely stare, nothing says late 70s like 50s throwback Arthur Herbert Fonzerelli, aka, The Fonz. Years have passed since we’ve seen the Fonz in action yet his mystique is always around us in the media, our heros, and our personal lives, or not at all.

Arthur Herbert Fonzerelli: The coolest, most imitated individual of all time

The Fonz is the absolute epitome of cool. The confident, laid-back attitude, bad-boy temperament, chauvinistic tendencies and misunderstood rebelliousness still influences society on a regular basis, making the boys feel inadequate and the young girls swoon. Sure, he was a high-school drop-out trapped in a dead-end job, hanging around with kids almost half his age, but that’s ok, he’s the Fonz. 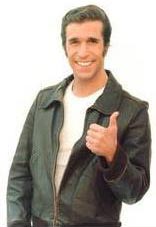 The Fonz: Giving his thumbs-up approval

The aura and persona of The Fonz lives on today and has influenced tens, even dozens, of current entertainers, all hoping to catch a bit of the fame, glory and magic that is the coolness of the Fonz. Jude Law, voted Sexiest Man Alive by the illustrious readers of People magazine, said, “I wish I could portray an introspective, conflict-ridden character as well as Henry Winkler [did]. On screen, I come across far too effeminate to pull off such a strong role. I wish I wasn’t English.” Nicolas Cage has said, “To play a character such as the Fonz would be...it’d be just incred...that’d be like so...fuck!” and rap-master Snoop Dog was recently quoted as saying some unintelligible shit that may have what to do with the Fonz. As a testament of the star-drawing power of the Fonz, the Queen of Pop, Michael Jackson, is rumoured to have undergone a series of plastic surgery procedures to look less like Diana Ross and more like the King of Cool. The Fonz still commands admiration.

Many emulators have tried to directly copy the Fonz’s charisma, mostly by greasing their hair and wearing a sneer, aspiring to be thought of as ’cool’. Sadly, they’re missing the depth, perhaps the hidden vulnerability, perhaps the humanity, of the Fonz, and as such they wind up coming across as kitsch.

Jon Bauman (Bowser), the baritoned voice of Sha-Na-Na has the mystery and intrigue of the Fonz. Who is this fog-horned crooner? Where does he come from? Does he have a ’past’? Does he have a present? He definitely has no leather jacket and that’s why he’s yesterday’s news while the Fonz remains the hero to aspire to.

Eddie and the Cruisers’ Eddie is a Fonzerelli-like heartthrob. Tough boy, good t-shirt, great sneer. Where Eddie falls short is by expressing his feelings through his music. The Fonz is far too cool for feelings. Eddie makes a noble attempt to attain the coolness but falls short because of his pansy-ass feelings. The quasi-queer probably has emotions too. The Fonz is homophobic and Eddie is cruisin’ for a bruisin’.

Luke Perry. Who? The guy from 90210, or 21 Jump Street, or Party of Five. Maybe. I can’t be bothered to Google it. He's a good actor and has appeared in movies and shows that don't suck. Great hair but falls short everywhere else because you can tell he’s a nice guy. By definition, Canadians can’t be cool. He should’ve emulated Buddy Holly instead.

Johnny Depp is a well-respected actor, talented guitarist, loving family-man, super ultra-cool and the girls are just crazy about him, and he owes it all to his convincing Fonzie impersonation. Many have tried but few have done it as well as Johnny Depp.

Rogers Nelson, or Nelson Rogers, the guy has two first names so pick an order. He’s better known as Prince and for a skinny black guy he’s nailed the Fonz charisma. He’s so cool he’ll make your nipples stiffen, although the purple, frilly, Elizabethan-garb can’t hold a flame to a Wal-mart t-shirt and a biker’s jacket. Prince is a mix of Fonzerelli-tude with a splash of Liberace flamboyance. Aaaaaaay, fabulous.

James Dean is the best Fonz imitator ever. He’s got the hair, the leather, the boots, the motorcycle, the cuffed jeans, the attitude, the rebelliousness, the sneer and a penchant for teenage boys. The only thing the Fonz has on James Dean is that the Fonz didn’t topple his Italian convertible sport-car while in a drunken stupor and die. That is not cool.

Hail to the King, baby

Elvis Presley, inarguably the coolest hillbilly ever to walk the planet. How’d he get so cool? Easy. He mimicked the Fonz. Inside scoop reveals that Elvis learned karate so he could chop a jukebox and make it play just like the Fonz. Also, the King was never able do the Fonzie-Russian-dance so he opted out for swinging his hips instead. What kept the King from being as cool as the Fonz? The King popped more pills than Joplin, Hendrix and Rush Limbaugh put together. Drugs aren’t cool - the Fonz has said so.

Roy Orbison. How could someone so close to the mark be so far off? He had the leather, the style, the boots, convincing sneer, genetics that allowed his hair to hold 75% more grease than the average man, plus he had a natural 5-octave vocal range. In addition to his God-given abilities, Roy Orbison wrote chart-topping hits spanning 4 decades and is considered one of rock n’ roll’s most prolific, enduring and talented artists. Yet, he still ain’t cool. The Fonz frowns upon anyone who spends 40 years pretending to be blind. Sit on it, Roy.

Few are cool enough to live in a mother-in-law apartment and still have a strong sense of self, fewer are cool enough to house their office in the men’s john of a soda-shop and still command respect. The Fonz left a venerable mark on society and is the modern day retro blue-print for bad-boys everywhere. 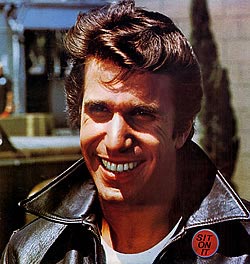